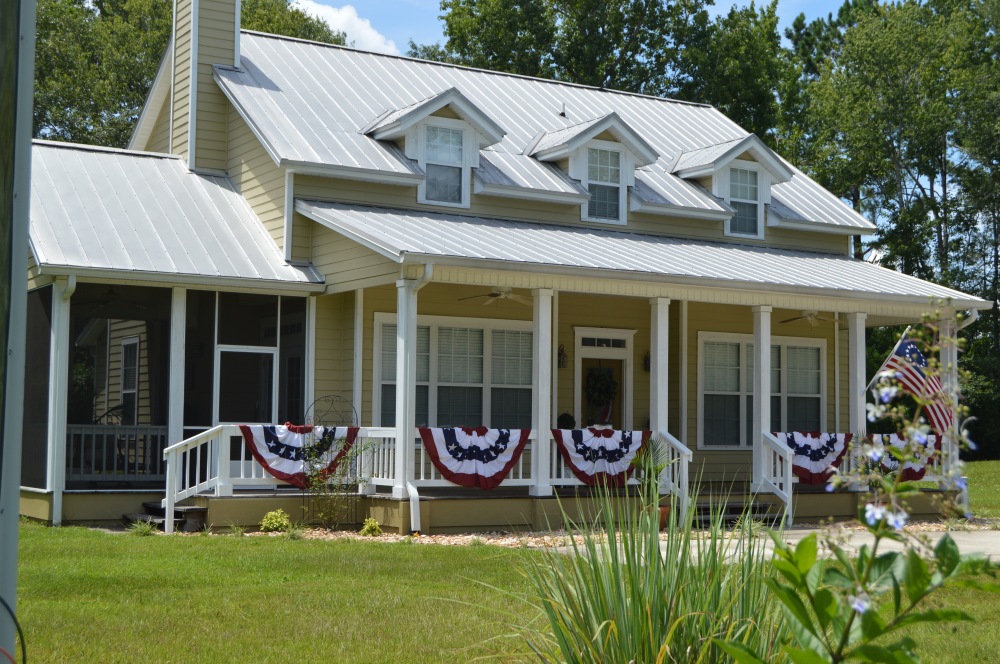 The very first holiday we celebrated in our current home was the 4th of July.   We had moved in only a couple of weeks earlier and hadn’t fully unpacked.  Our party was small—just my husband, son, and mother (who came down to help), along with our only friend in the area, and me.  We didn’t have much in the way of decorations, but having unpacked the kitchen, I was happily able to cook.

This year was quite a bit different—a potluck party of twelve.  We decided to keep the menu traditional with picnic fare, despite the necessity to eat inside (Florida heat in July is brutal!).  We provided the basics, such as hamburgers, hot dogs, a toppings bar, a few side dishes, drinks, and beer, while our friends brought various desserts and salads to round things out.

Outdoor games such as corn hole and bocce ball were provided, but they weren’t really used, as the ground was saturated from storms earlier in the day.  The party did spend a little time outside as it got dark, lighting sparklers and watching the fireworks being set off around us.

This year, I was excited to decorate for the holiday.  I kept it simple, using American flags, white votive candles in clear glass holders, a red-striped burlap runner, and tin lanterns with punched-out star patterns (found in the dollar bins at Target).  The sofa was adorned with red and patriotic pillows (1776 pillows are from Michael’s; red pillow cases were found on Amazon).  Books such as The City Tavern Cookbook, The Colonial Williamsburg Tavern Cookbook, and a copy of the “Declaration of Independence” were on display in the kitchen, as was a tea tin filled with Boston Harbor Tea.  Hors d’oeuvres were served in pewter serving dishes and patriotic tin buckets.  White serving platters were used for the burgers and hotdogs, toppings and cheeses selections.  More topping were served in small (1-cup) bowls with red, white, and blue designs (some with stars, some with stripes).  These smaller dishes were purchased on sale at Michael’s.  To keep cleanup easy, we chose to use paper plates (in red and blue), plastic utensils (in white), and clear plastic cups.  Paper straws (red and white stripes, blue with white stars) and napkins (blue with red and white stars) added fun flare.  These were all purchased at Target.

For a little fun, red, white and blue glow sticks, bracelets, necklaces, and wands were available for kids, young and old alike.  We also had red, silver, and blue Mardi Gras beads, but somehow they all ended up on my son.  🙄

Normally when I’m hosting a function, I forget to take pictures to document the food and decorations.   While I did get a few photos from this party, they aren’t very good (sorry!).  One thing I learned after this experience is that I need to have a friend take the pictures while I perform my duties as a hostess. 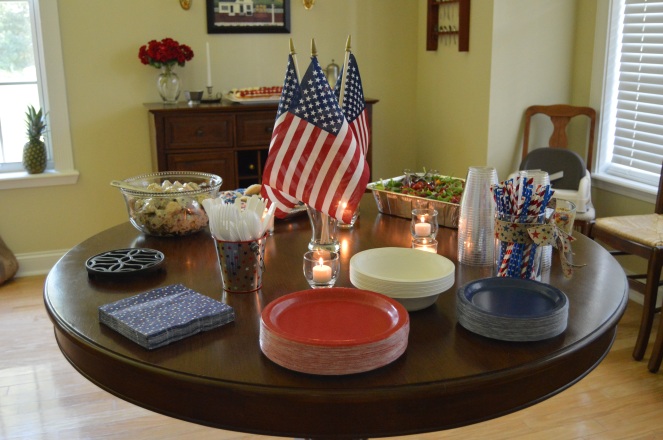 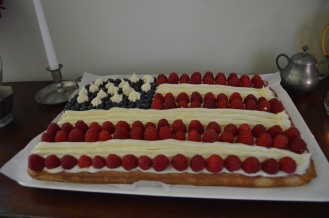 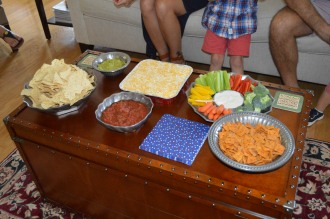 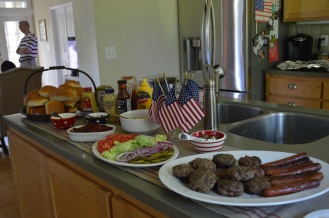 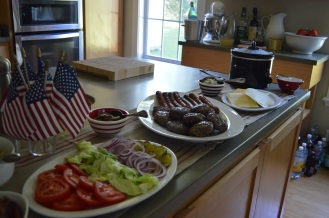 Guacamole & Salsa (provided by a guest)

Quinoa Salad with Goat Cheese (provided by a guest)

(All desserts were provided by our guests)

Notes on the Menu

As the guest list for this party grew, I knew there was no way I would have the time or energy to provide enough food to feed everyone, so we made it potluck.  The majority of the recipes I made were not my own, but rather tried and true ones I have been making for years.  The potato salad comes from the ever-incredible Ina Garten—New Potato Salad.  The recipe for Squash Casserole can be found on the Southern Living website—Old-School Squash Casserole.  I highly recommended trying both this summer.

When planning the hors d’oeuvres, I decided to save time and go with store-bought items such as chips, pretzels, and trail mix.  I did cut the vegetables for the crudités platter myself, but used bottled ranch dressing as a dip.  The only item I did make myself was the Crack Crackers.  My husband loves Cheeze-It Crackers, so when I found this recipe for tricked-out cheese crackers in Elizabeth Heiskell’s cookbook, What Can I Bring—Southern Food for Any Occasion Life Serves Up (Oxmore House), I knew I had to make them.  They are so very good!  I wish I could share a link for this recipe, but alas, I haven’t found one.  However, if you have the hankering to pick up a new cookbook, get this one.  It is filled with some fantastic, easy, and affordable recipes.

Finally, I was so relieved to find out that people were going to bring desserts—one less thing to worry about!  My friend, Cecilia, is responsible for the gorgeous flag cake, which you can see in the pictures above.  If you are so inclined to make it yourself, here is the link for the Flag Cake recipe that she used.