A few years ago, Mississippi Pot Roast became all the rage.  There are thousands of recipes out there and I have tried many.  The standard components for this delectable, slow-cooked meat are a beef pot roast (duh!), a jar of pepperoncini peppers, a stick of butter, and a packet of ranch dressing mix.   Somewhere, in the mess of the internet, I saw the addition of au jus seasoning mix and decided to give it a try (I wish I could remember the site to give credit where it’s due).  I’m so happy I did!  It added even more flavor, which I didn’t think was possible.  If you can’t find au jus seasoning mix, you can use brown gravy mix for similar results.

This recipe smells ridiculously good as it cooks and tastes even better.  Whenever I make it, my husband stands next to me as I shred the meat and eats it directly from the pot.  I like to serve the beef over a bed of mashed potatoes (The Pioneer Woman’s Mashed Potato Casserole) and green beans on the side.  This meat also is great on sandwiches with creamy horseradish sauce, caramelized onions, and melted provolone cheese.  Anyway you have it, it’s good!

1. Heat the oil in a large skillet over high heat.  Once the oil is shimmering-hot, add the beef to the pan to brown, about 2-3 minutes per side.  Meanwhile, turn on your slow cooker and set it to warm.  Once the meat has browned, transfer it to the warmed slow cooker.

2. Sprinkle the ranch dressing mix and au jus seasoning mix over the beef.  Then pour the pepperoncini peppers and their brining juice over it.  Finally, place a stick (8 oz) of butter on top of the meat.  Put the lid onto slow cooker and set it to low.  Allow the meat to braise for 8 hours.

3.  Once the meat has cooked, scrape any remaining fat off the exterior.  The beef will be extremely tender, so rather than slice it, use two forks to pull the meat into large pieces.  Toss the beef to coat in the cooking juices.  Serve warm. 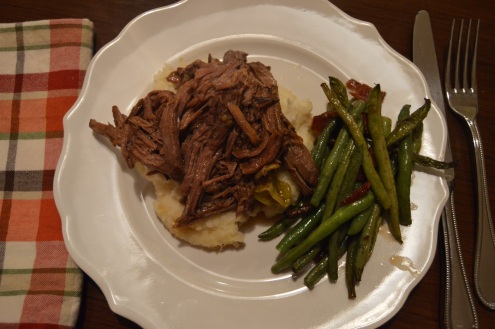 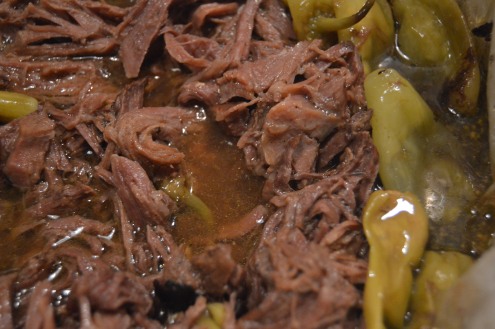