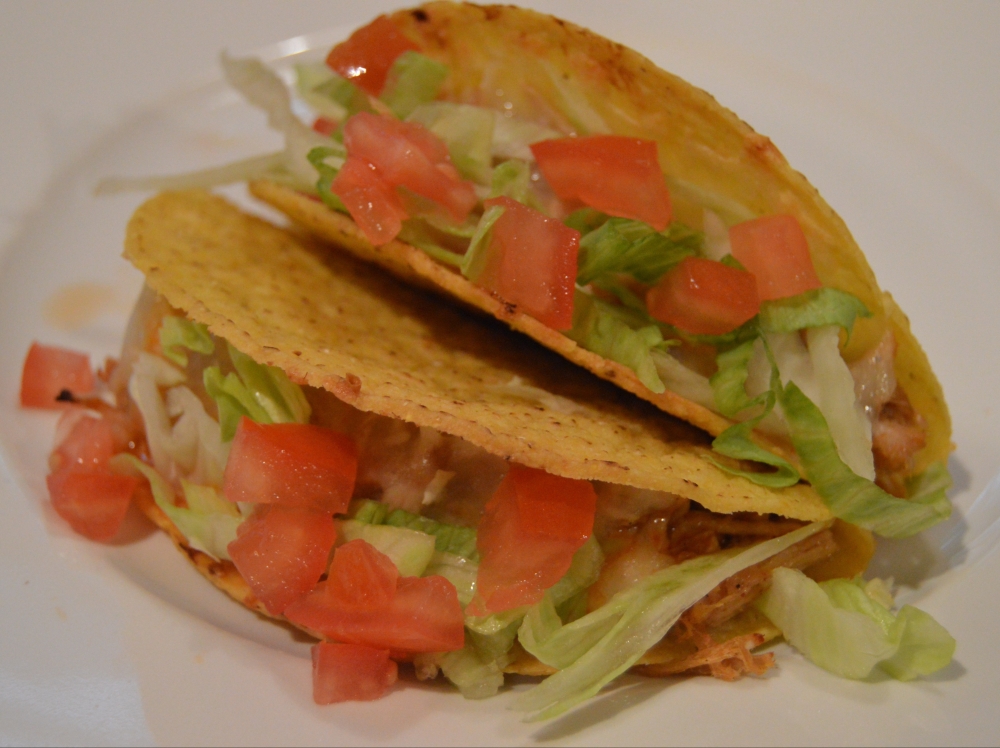 Lucinda Scala Quinn, a long-time food editor for Martha Stewart Living Magazine, said in her first cookbook, Mad Hungry: Feeding Men and Boys, that hard-shelled tacos are “less desirable, but kid friendly.”  While I love her cookbooks and appreciate her culinary knowledge, I have to disagree with her that they are “less desirable.”  I love a good hard-shell taco, and if that makes me childish, I don’t want to be grown up.  I will concede that they are messy to eat, but there is a way to combat this issue: If you fill the shells with your meat of choice, top the meat with cheese, then bake them in the oven for several minutes, the shells soften slightly and everything holds together.  This discovery has been life changing—my husband, who was a soft taco devotee, has been converted to the Church of Hard-Shell.

These pork tacos are sweet and savory and completely satisfying, not to mention easy to make.  The pork simmers away in the slow cooker all day; the most work you need to put into preparation is shredding the meat before serving.  Additionally, the flavor improves over time, so you are guaranteed to have amazing (and versatile) leftovers.  This recipe has become a family favorite.

1. Cut the pork shoulder in half and place both halves in a 6-quart slow cooker.

3. Pour the mixture over the pork, then place the lid on the slow cooker, and set it on low heat.

4. Allow the meat to simmer away for 8 hours.  It will smell really freaking good, but avoid lifting the lid to get a better whiff.  Every time you lift the lid, you need to add 30 minutes to the cooking time (sounds ridiculous, but it’s true).

5. Once the meat has finished cooking and you’re ready to shred, preheat the oven to 400 degrees.

6. Okay, so this step is kind of gross, but it’s necessary, so suck it up.  Using a large spoon, skim as much liquified fat off of the surface of the cooking liquid as possible, then scrape the fat-cap (the layer of fat found on a pork shoulder) off of the meat.  Discard all of it.

7. Using meat claws or two forks, shred the meat, removing any fatty bits you come across (because who wants to bite into a glob of fat?).  Once the meat is shredded, toss it with the cooking liquid.  If you feel there is too much liquid, remove the excess with a large spoon and discard it.

8. Set the taco shells upright in 9×13-inch baking dishes (I line mine with aluminum foil for easy cleanup—I’m lazy like that).  Fill each shell with the desired amount of meat, then top the meat with generous portions of shredded cheese.

9. Bake the tacos for about 8-10 minutes, or until the cheese is melted.  Serve immediately with your toppings of choice.

🌮 This recipe feeds a crowd, so if you’re making this for a smaller group, halve the recipe or freeze leftover meat for up to 3 months.