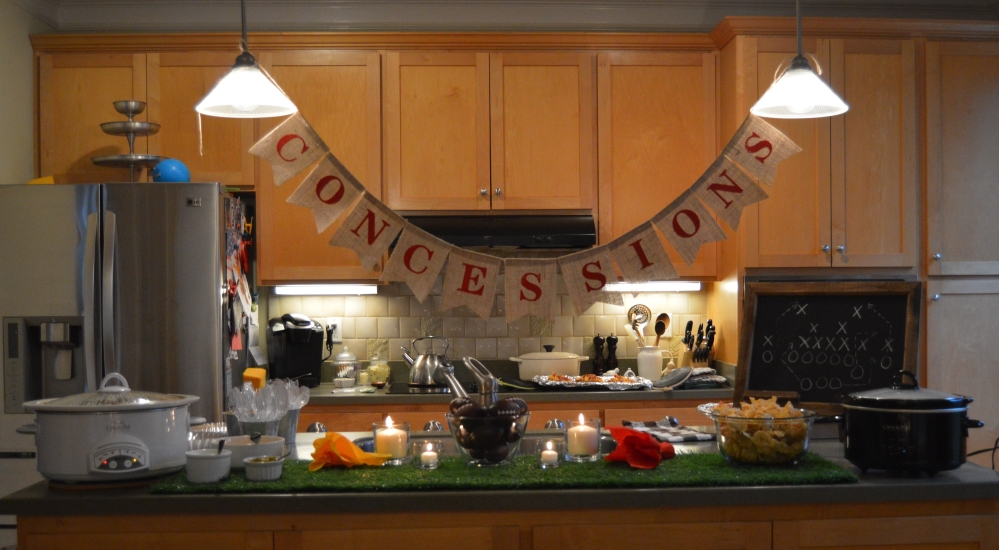 Okay, so it’s been a few weeks since the Super Bowl.  I am only now coming to terms with the fact that the New England Patriots won yet again.  Fortunately, I was distracted during the game—parties have that effect on me.  If my team had been playing in the big game, you better believe that I would not have hosted a party.  Why?  Because I would want to watch it—undisturbed.  But my team didn’t make it.  Truth be told, my team is a hot mess at the moment, but I’m not going to dwell in that misery.  Let’s talk about the party.

My husband had been wanting to invite some of his friends from work over to our house and we decided the Super Bowl was the perfect opportunity.  It was a pot luck affair and turned into quite an impressive spread.  We provided the drinks, which included a variety of soft drinks, wine, craft beer, and a Bloody Mary bar.  I also made potato skins, chili, queso dip, a crudités platter, and salsa.  I will include a full menu below.

To decorate our kitchen island (which served as a buffet), I used a green faux turf runner, white pillar candles and votives in various sizes in cylinder glass holders, and a glass bowl filled with mini-football shaped stress balls.  I made penalty flags by wrapping golden-yellow full-sized paper napkins around golf balls, tying them off with twine.  I also made a red challenge flag using the same method.  I hung a burlap pendant sign spelling out “concessions” between the two lights which hang over over the island.  Food served on the buffet was held in crockpots to keep warm.  Toppings were held in various sizes of white Corning Ware dishes.  A glass large bowl was used to serve tortilla chips.  On one side of the buffet, I placed a chalkboard with a football play (created by my husband). 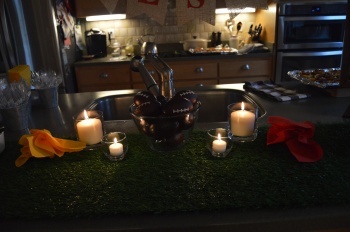 The centerpiece for the kitchen table was made up of white pillar candles of various heights, set on glass saucers.  White votives placed in small glass candle holders were scattered over the table and amongst the food.

Rather than face an evening of doing dishes, I opted to use clear plastic plates (dinner and dessert sizes), bowls, and utensils.  The utensils were held in small tin buckets, as were the yellow napkins (same color as the penalty flags).  They were set up on the kitchen counter behind the buffet—spacing was a factor in this decision.

The Bloody Mary Bar was set up on a side console table in the kitchen.  To protect the surface of the table, the pitcher of Bloody Marys, the garnish selection, and the cups and straws were placed on tin trays.  The Bloody Mary mixture was held in a clear glass pitcher and was accompanied by another penalty flag.  The garnishes (which included jalapeño stuffed olives, celery ribs, pickled okra, and pickled green beans) were set in glass mason jars and white Corning Ware dishes.  Skewers to hold the garnishes in the drinks were placed upright in a tall, thin shot glass.  Clear plastic cups (solo cup-sized) were provided for the Bloody Mary’s, clear plastic tumblers were set out for wine, and black & white paper straws (we had to work the refs in somehow) were presented in yet another glass mason jar.  The wine was set out on top of our liquor cabinet.  Beer and soft drinks were in an ice-filled tin tub on our screened-in porch (we live in Florida and it was in the 70s at game time).

When it came to the food, our guests went all out.  The food they contributed was so good!  And my, there was a lot.  We were eating leftovers for days.  (No complaints here!)

🏈 You May notice that not everything is included on the menu board.  This is because I was not sure what everyone was bringing.  I did my best to include as many items as possible.

While this party was a really fun to host, I’m hoping that next year my Steelers will be representing the AFC on Super Bowl Sunday.  If that does indeed happen, I’ll be keeping it simple.  But if it doesn’t, I’ve got my game plan in place.