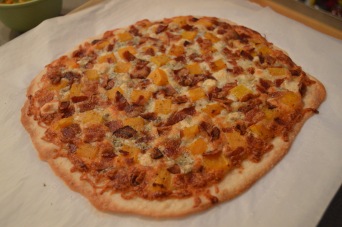 This was a controversial recipe in our household.  I wanted to shake things up when making pizza this past Friday night, so I decided to make a flatbread with ingredients I had on hand and wanted to get out of the refrigerator—bacon, Gorgonzola cheese, and cubed butternut squash.  I love butternut squash; my husband does not.  He enjoys it in some recipes, such as my Autumn Squash & Chicken Salad, but generally speaking, he tolerates when I make it.  Well, the combination of salty, smokey, tangy, and sweet was appealing to me.  My husband strongly disagreed and refused to even try it.  After some cajoling on my part, he finally took a small bight, then promptly said he hated the squash.  After some discussion, he admitted he might enjoy it if the butternut squash was puréed and spread on the crust like pizza sauce instead of in chunks as a topping.  Personally, I thought it was pretty damn good and wouldn’t change a thing.  However, as I’d really like to make this one again, I may try his suggestion and see if this flat bread garners a more welcome reception.

1. Pre-heat the oven to 400 degrees.  Toss the butternut squash with the olive oil, salt, and pepper and spread it in an even layer on a baking sheet lined with parchment paper or silicone mat.   Roast the squash for 15 minutes, or until it’s softened and the edges begin to brown.  Remove the squash from the oven and allow it to cool.

2. Jack up the oven temperature to 450 degrees.

3. Meanwhile, combine the flour, baking powder, and salt in a large mixing bowl.  Add the water and olive oil and mix with a wooden spoon until a shaggy, sticky dough forms.  Turn the dough out onto a lightly floured surface and knead into a smooth, elastic ball, 2-3 minutes.  Divide the dough in half and shape each half into round, flat disks.   Wrap each disk loosely in plastic wrap and let them rest in a warm place for at least 15 minutes.  (This step can be done in advance.)  You will only need one of the pieces of dough for this recipe; use the other piece of dough to make another pizza of your choice, or save it for later use.

6. Bake the flat bread on a pizza stone or an inverted baking sheet for 10-12 minutes.  Remove it from the oven and allow it to cool for a minute or two, then slice it and serve.