This is my mum’s recipe—she makes the best potato leek soup, at least in my opinion.  It’s flavorful and so easy to prepare.  If you are unfamiliar with the vegetable, a leek is part of the onion family, has a mild flavor, and kind of looks like a giant scallion.  Unlike scallions, you do not want to eat the dark green parts, as they are too tough.  Leeks happen to grow in sandy soil, so there’s often grit caught between the layers, making it important to clean them thoroughly before cooking them.  When doing so, I slice the leek lengthwise into quarters, leaving the root end in tact, then run the leek under water while fanning the layers, exposing any bits of sand or dirt.  It sounds like a pain in the ass to deal with, but it’s worth it, especially for a soup like this.

1/2 medium-sized carrot, grated on the large holes of a box grater

1. Melt the butter in a medium-sized saucepan over medium-high heat.  Add the leeks and onion to the pot and sauté until softened, about 10 minutes. 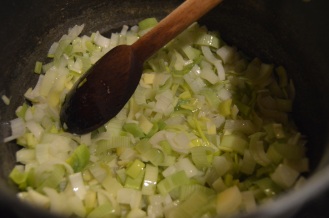 2. Add the potato to the pot and stir to combine, then pour in the chicken broth.  Stir once more.

3. Raise the heat to high and bring the broth to a boil.  Once boiling, lower the heat to low, then cover and simmer for 20 minutes.

4. 10 minutes into the simmering time, add the shredded carrot to the pot and stir to distribute. 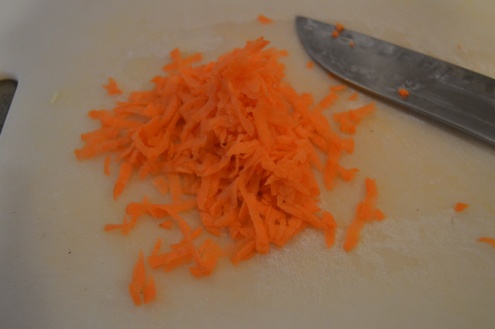 5. Once the potatoes are fork tender, blend the soup using an immersion blender, or in batches in a countertop blender.  If you feel the soup is too thick, add more chicken broth to taste.

6. Add the heavy cream to the soup.  Stir to combine and simmer until warm.  Taste for seasoning; add salt and pepper to taste.  Serve warm with rolls and a salad.