When I was making Potato Leek Soup for St. David’s Day, I was considering how to make a low-carb leek soup that still has substance.  Cauliflower is often used as a substitute for potatoes, so it occurred to me that it would pair well with the leeks.  While my husband and I both love cauliflower, there are some I know that do not.  To appease the haters, I decided to add white cheddar cheese, which contributes a sharp, salty tanginess to the dish.  The final product is a silky-smooth soup that’s bursting with flavor.  Pair it with a salad and chunk of bread or your favorite sandwich for a satisfying meal…or you could just sip it out of a giant mug…no judgement here.

1 large parsnip, peeled and roughly chopped (or substitute with another carrot)

1/2 tsp ground nutmeg, plus a pinch or two more for garnish

1. Melt the butter in a soup pot or large Dutch oven over medium-high heat.

2. Add the leeks, celery, carrot, and parsnip to the pot.  Season the vegetables with 1 tsp each salt and pepper.  Stir to combine.  Sauté the vegetable mixture until softened, about 7 to 10 minutes.

3. Add the cauliflower florets to the pot and stir to combine them with the vegetables.  Sauté the combination for another 5 minutes. 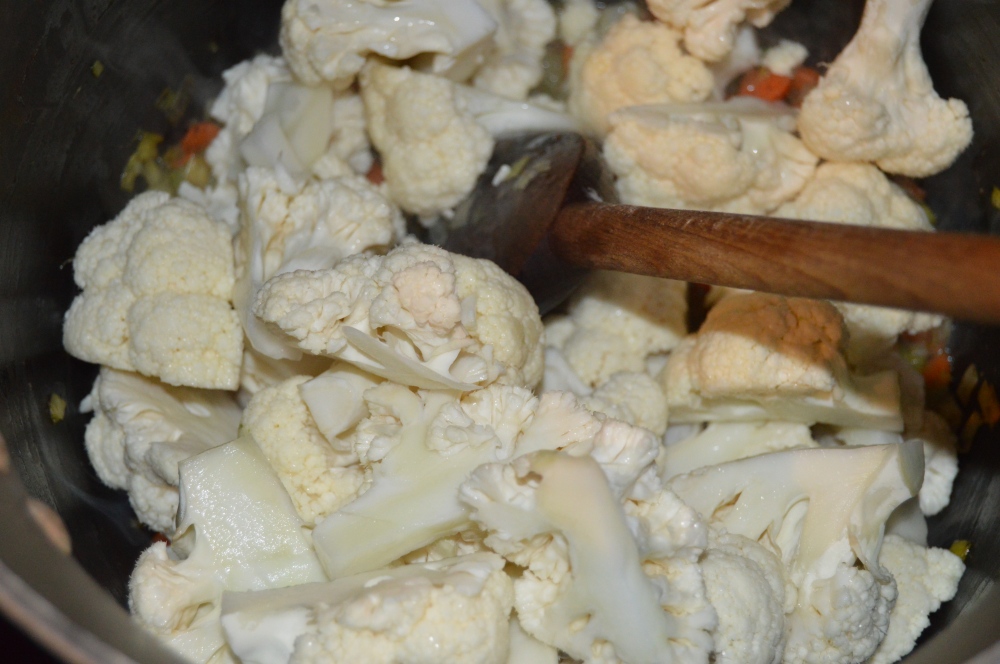 4. Pour the chicken broth into the pot and give it a stir.  Bring the liquid to a boil, then reduce the heat to medium-low, cover the pot with its lid, and simmer for 20 to 25 minutes, until the cauliflower is soft.

5. Remove the pot from the heat source and ladle 1/3 of the broth and vegetables into a blender.  Place the lid on the blender, but remove the center cap—this will allow steam to escape and prevent you and your kitchen from enduring a freaking hot soup explosion.  Cover the hole in the lid with a tea towel (so you don’t spray soup everywhere as you blend) and purée the mixture until smooth.  Pour the puréed soup into another vessel (such as a large mixing bowl).  Repeat this process twice more with the remaining broth and vegetables.  You could also use an immersion blender, but the end product won’t be as smooth.

6. Return the puréed soup to the pot and place it back on a burner set to medium-low heat.  Add the mustard to the soup and stir to combine.

7. Add the cheese, one handful at a time.  Stir the cheese into the soup until it’s completely melted, then repeat the process until all the cheese has been added.

8. Season the soup with the nutmeg.  Stir to distribute it throughout.  Taste the final product to determine if it needs more salt and pepper.  Season as desired.  Serve warm, garnished with a pinch of nutmeg sprinkled over the top. 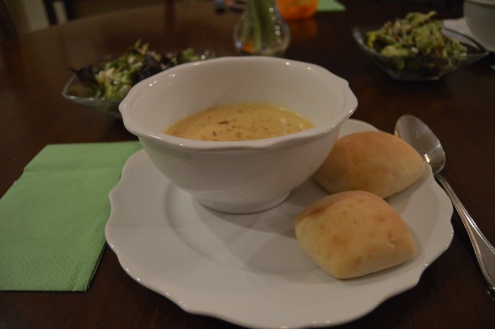 🥘 Clean all vegetables thoroughly before adding them to any dish.  I emphasize cleaning the leeks in the recipe because they require added attention.  Leeks grow in sandy soil and often come with bits of grit between their layers.  When cleaning leeks, I quarter them lengthwise with the root ends in tact, then wash them under running water, making sure to rinse between the layers.  Dry them thoroughly before using them.